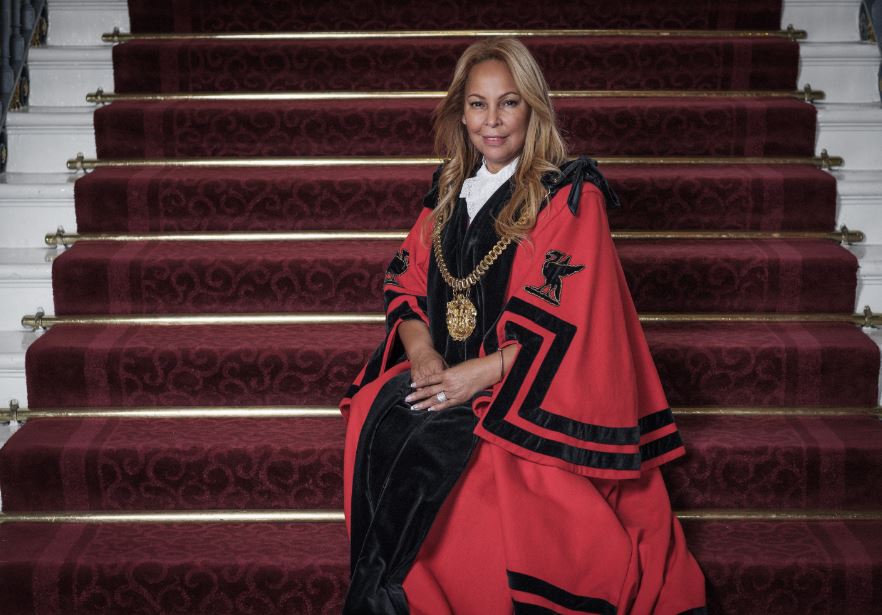 Liverpool’s first black Lord Mayor has been reappointed for another year as the city’s first citizen.

Councillor Rothery’s term as Lord Mayor and her fundraising activities has been severely impacted by the Covid-19 lockdown and the decision to reappoint was unanimous among all party leaders.

This will be the first time in the city council’s history that a Lord Mayor will perform two successive terms.

Councillor Rothery, who was named the UK’s most influential black politician at the National Baton Awards 2019, said she is overwhelmed and humbled by the honour.

Speaking ahead of her formal reappointment she added the worldwide impact of the George Floyd murder has inspired her to redouble her efforts to be a role model for the black community and to encourage people to strive to achieve their goals, regardless of their background.

Breaking the mould isn’t new territory for Councillor Rothery, as in 2012 she made political history by becoming the first Liverpool councillor to address the floor of the United Nations in Geneva. Addressing representatives from more than 50 countries, Anna talked about religious linguistic and minority communities differences and impacts and the city’s work undertaken to increase political representation.

First elected as a councillor in 2006 Anna is responsible for the Princes Park ward – an area she was born and grew up in.

Anna attended Granby St infants St Silas Primary School and the former Paddington Comprehensive School, and continued her education by undertaking a number of diplomas in various subjects including law, sociology and psychology.

For more than 25 years, the new Lord Mayor has worked on business and community development initiatives, and now works as a consultant for Migrant Workers North West – an organisation which champion the rights of our diverse community. She is also the North West Ambassador for the British Institute of Human Rights.

Currently Mayoral Lead for Equality and Race, Anna has always put the community at the heart of her work.

She is a key player in Operation Black Vote – a scheme to get more black people in to politics – and also plays an integral role in bringing various community, political and faith leaders locally, nationally and internationally together to deal with issues relating to inclusion, diversity and new and emerging communities. There is a particular focus on education, employment, business, cultural awareness and championing economic equality.

Anna regularly chairs events at the International Slavery Museum and is involved with the Slavery Remembrance Day celebrations and commemorations which will take place on Sunday, 23 August.

“To be given the opportunity to represent my city for an unprecedented second year is overwhelming, although I wish the circumstances were different.

“Of course Covid-19 has had a terrible impact on so many in our communities but I’ve been so proud how people in the city have come together to support each other. As we slowly come out of lockdown I look forward to helping to celebrate those people and groups who have made an outstanding contribution to our city in this crisis.

“Being Lord Mayor has been the greatest experience of my life and having the opportunity to champion what I hold most dear: equality, diversity and community has never been so important, given what has happened around the Black Lives Matter campaign.

“Racism is a threat to our society and has no place in a multi-cultural city. I will be working with all of our community, business leaders and educators to ensure we work together to eradicate it. There is no place in our city or in the hearts of our people for racism.

“I’m a working class woman brought up in Toxteth – where you come from should never stop you striving or achieving your goals, as Marcus Rashford has proved so powerfully this week, and these past few months have made me even more determined make a difference to the lives of others.

“It’s been an exciting and emotional journey so far and hopefully at the end of this second term the charities I am supporting will feel not only the financial benefit. But will have given the the entire city a greater understanding of their wants needs and aspirations for their beneficiaries. All charities are suffering at the moment and I’m delighted I’ve got the opportunity to help make a difference.”

“Anna has been a leading light in championing the city’s diverse communities since becoming a councillor in 2006 and she has been a credit to the role of Lord Mayor.

“We are a welcoming city with a wide variety of cultures which we want to champion and celebrate, and Anna’s reappointment will hopefully inspire and educate in equal measure.

“It’s been a shame her charitable fundraising has been so affected by Covid-19 but we all know Anna has the passion and determination to convert obstacles and challenges to an advantage.

“We can all take inspiration from her enthusiasm and be proud that we have a Lord Mayor who is so committed to improving equality in our society. We need people like Anna now, more than ever.”