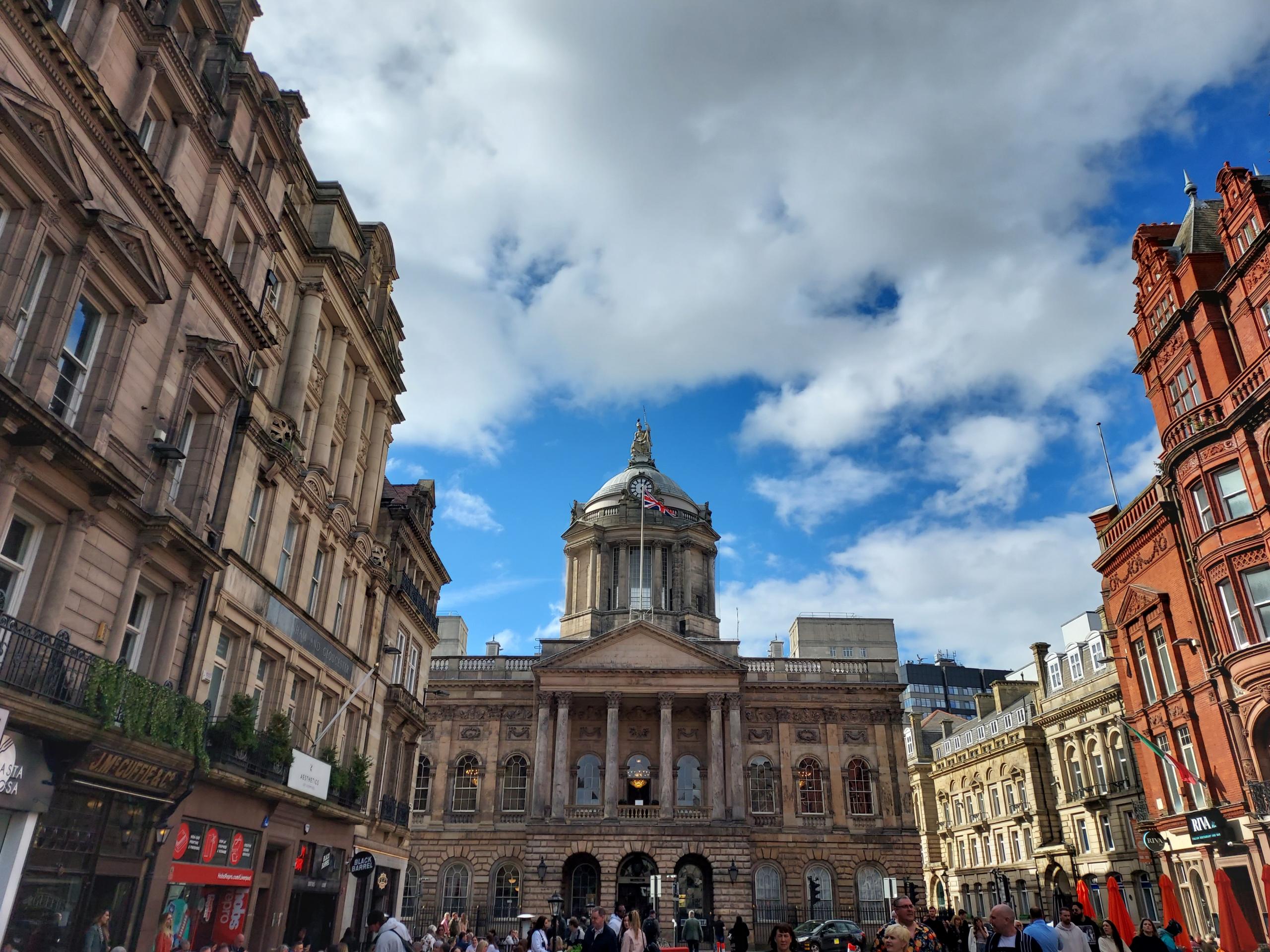 This year, 2022, is Her Majesty the Queen’s Platinum Jubilee. As the UK prepares to celebrate Queen Elizabeth II’s 70 years of service, in this blog City Halls guide James O’Keeffe takes a fascinating look at a tale of two portraits of the Queen that were commissioned at the beginning of her reign in the 1950s…

During her reign Her Majesty Queen Elizabeth II has visited Liverpool Town Hall many times. Her first official visit to the city was while she was still Princess Elizabeth in 1949 and she and Prince Philip took the opportunity to sign the visitors’ book of the Town Hall. Her first visit to the building as Queen came five years later in 1954.

Coming right up to date, the most recent visit to the Town Hall came in 2016 when, together with Prince Philip again, she was welcomed by the Lord Mayor, Councillor Roz Gladden, and they enjoyed lunch in the building. The menu for lunch that day was adapted from the design used for Queen Victoria when she had visited the same building in 1886.

Before the meal, as the Queen ascended the grand staircase of the Hall, it was noted that she turned back and looked towards her large portrait which has hung on the wall above the main staircase since 1956. Onlookers noticed that she smiled when she looked at it. What’s the significance of this story? Well, the Queen intimated to another Lord Mayor Councillor Eddie Clein, when she visited in July 1999, “You know Lord Mayor, this is one of my favourite Town Halls in the country”. Perhaps she was just pleased to be visiting again. However, she may have been smiling at the painting itself; after all, the portrait of the Queen in the Town Hall has a fascinating story behind it. 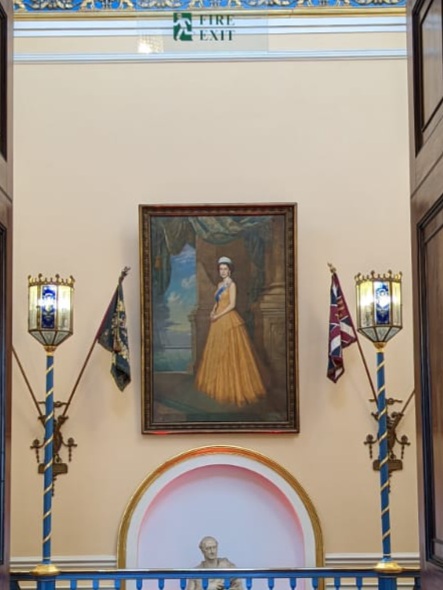 Painted by Edward Irvine Halliday, a native of Liverpool, the portrait was commissioned by the Council in January 1955 in celebration of Elizabeth’s coronation. Nothing extraordinary about that so far. Also, the portrait appears very much in keeping with its surroundings occupying the large wall on the landing of the staircase where it can be well-admired from the bottom of the stairs, halfway up and finally from the balcony at the top.

On the adjacent walls there are similarly sized portraits of the Queen’s grandparents: King George V and Queen Mary. Incidentally, the portrait of George V was actually painted by another very successful portrait artist, Sir Samuel Luke Fildes (1843-1927), who was another native of Liverpool and as a boy lived in Standish Street before moving to live with his Grandmother Mary in Chester. It’s interesting how things link together, as Mary Fildes was a political activist and well known as one of the speakers at the Peterloo Massacre. 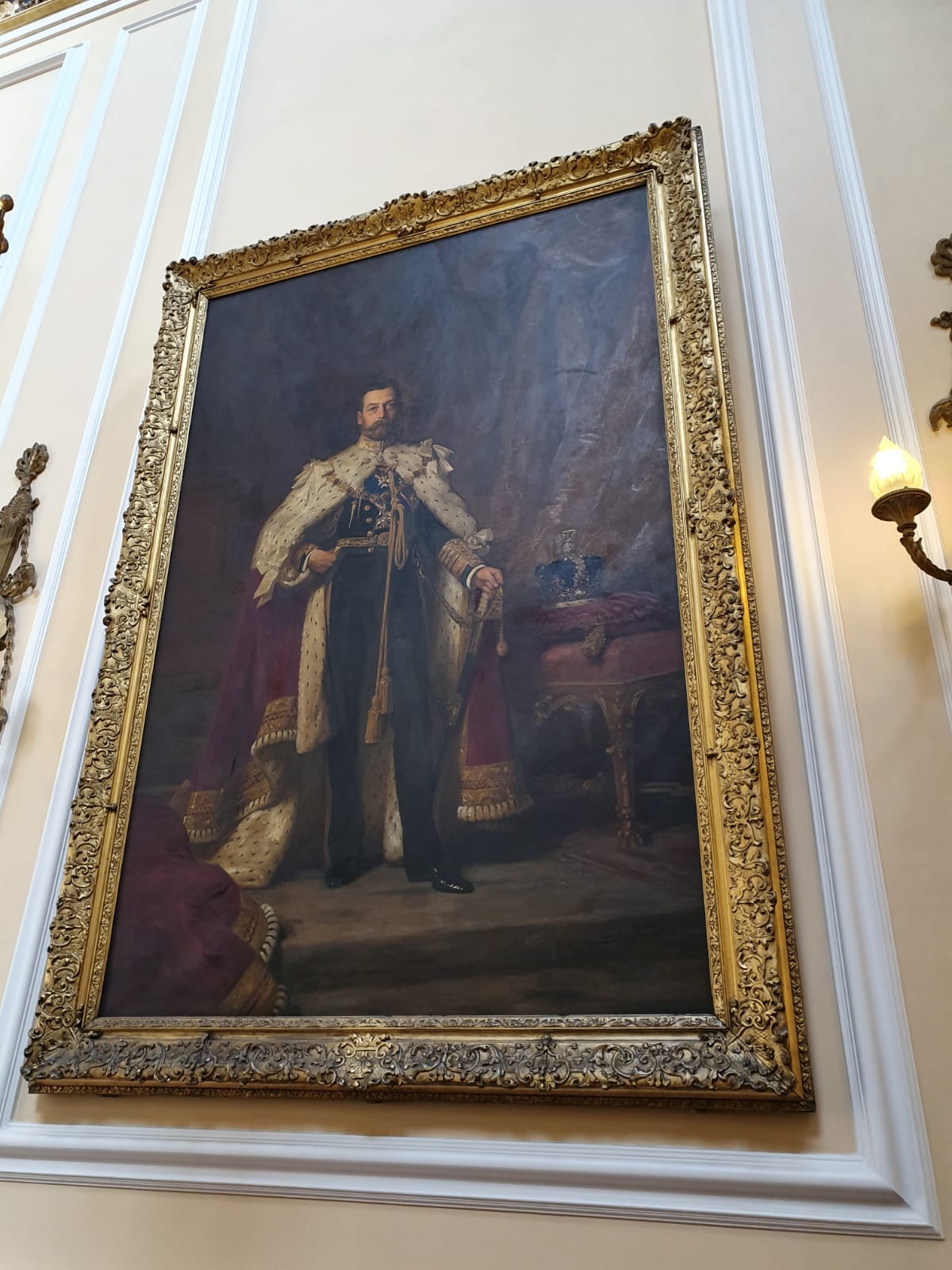 Samuel would go on to become one of the most popular and sought-after artists of his generation, and he even illustrated Charles Dickens’s last novel The Mystery of Edwin Drood. When Dickens invited Fildes to illustrate his book he told him that he was impressed with his work, “Houseless and Hungry”, which appeared in the periodical, The Graphic, and depicted desperate people cold and queueing for shelter. Dickens wrote that he saw that Fildes was skilled at drawing wretches and just needed him to prove he could also draw pretty ladies!

So, back to the portrait of the Queen…

The 1,000 guinea commission for the first portrait was given to a 36 year old popular London-based artist, John Napper (1916-2001). Napper had one sitting with the Queen for the Liverpool commission and decided on the clothes that Her Majesty would be wearing. He planned to include the symbol of the County of Lancashire, the red rose, as well as a Liver bird. 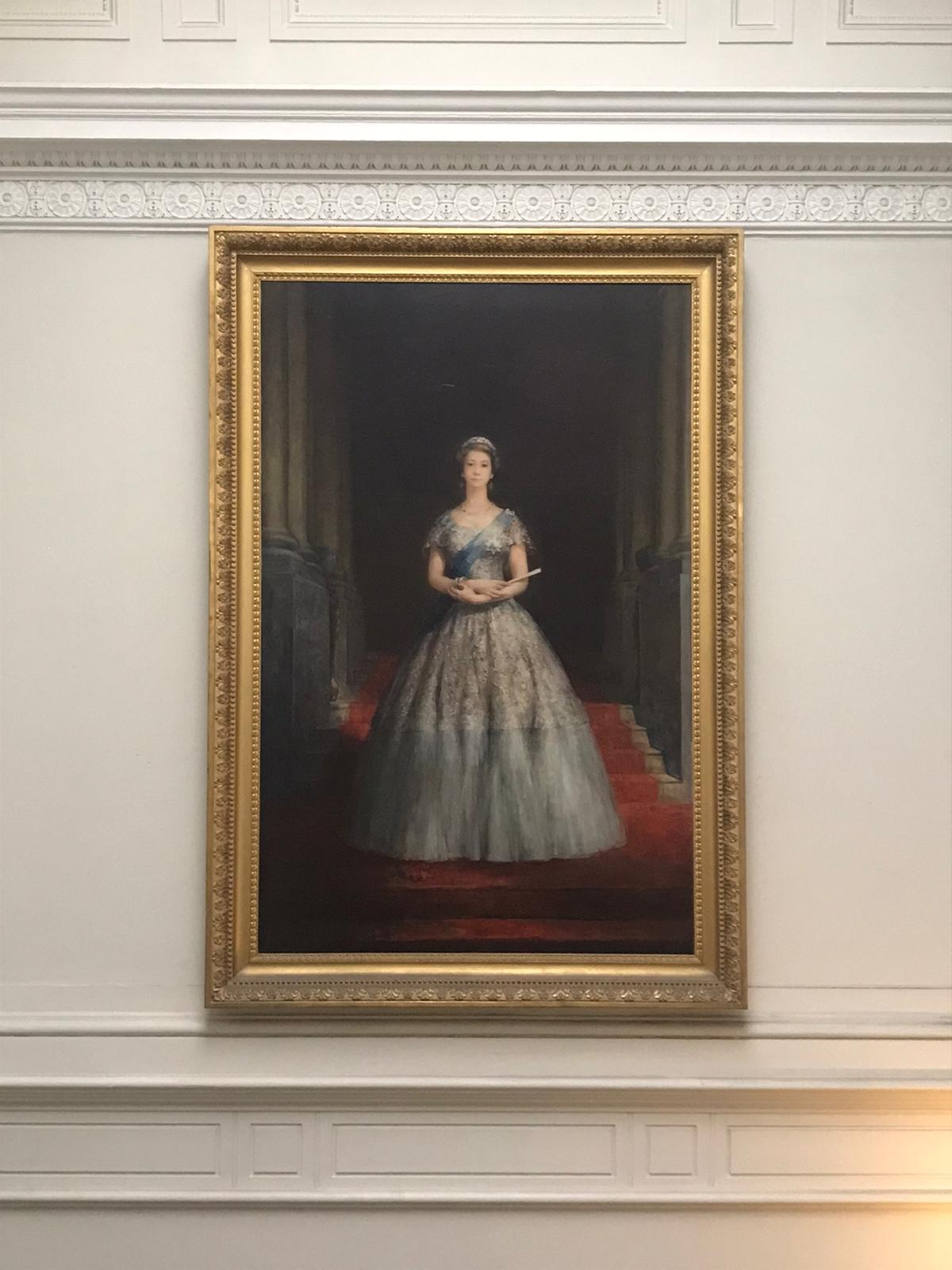 When Napper’s portrait was completed in May 1953 it became the star attraction of a new exciting exhibition at the Walker Art Gallery: Kings and Queens. However, public response to this new portrait was mixed with comments such as:

“the neck is far too long”

“there’s something about the mouth that’s all wrong”

“[the Queen looks] too old and prim”

There was also no sign of the Liver bird and the red Lancastrian rose was difficult to see as it almost blended in with the red carpet the Queen was stood on. The criticism, noted the Liverpool Echo in 1955, “whistled out of the Walker Art Gallery rooms through the streets of Liverpool and reverberated round the world”

Art critics, though, came out in defence of the new painting:

“a daring and brilliant assertion that state portraiture in the grand manner is not dead” (David Piner, National Portrait Gallery)

“Both sides of me- the lover of life and of painting- have acclaimed the portrait…it surely is as absurd to look for her Majesty’s informal and relaxed smile on a 9ft canvas as it would be to demand her regality from a snapshot.” (Hugh Scrutton director of the Walker Art Gallery)

In spite of, or more likely because of, the controversy surrounding Napper’s portrait, as a columnist for the Liverpool Echo noted, it had actually become a “money spinner” and earned the city a profit. The artist had been paid 1,000 guineas but as the main attraction of the Kings and Queens exhibition of 1953 at the Walker Art Gallery, it helped to earn the city over £2,000 with nearly 50,000 people coming to see it. Extra staff even had to be brought in to the Gallery at weekends to deal with record crowds.

During the exhibition’s run, “Listener” in the Liverpool Echo on 17 May 1953 noted, “We have several splendid State portraits yet extremely few citizens have ever bothered to inspect them – they could not even specify them. Here, Mr Napper produces one which proves unpopular and the public roll up in tens of thousands to study the object of the dispute. That it is an ‘interpretative’ – not photographic – portrait, nobody will deny. Some High Court dignitaries have pronounced it a good likeness. I don’t know – but I do know that most of the people who say it is a poor likeness have never seen the Queen or seen her for only a few seconds”.

The artist himself said of his work: “I like the picture better every time I see it.” As for the criticism of the “far too long neck”, Napper said, “I want to point out that it was done to emphasise the dignified stance of Her Majesty and, also, because a better effect will be gained when the portrait is ultimately hung from a high position.”

At the end of the exhibition the portrait was transported to the Town Hall and took pride of place on the wall below the building’s central dome. After a trial few weeks (during some of which the portrait was covered by a large dust sheet) the Council’s Finance Committee decided that, although it was a fine painting (about which there was no doubt), due to the reception from the public the portrait could not stay in such a prominent location as the main staircase of the Town Hall.

The Finance Committee took the decision, therefore, to commission a second portrait at the beginning of 1955 at a fee of another 1,000 guineas. Edward Halliday (1902-1984) was perhaps a natural choice: he had been born in Garston and attended Liverpool College before going on to study at the Royal College of Art and the British School of Rome and finally becoming an accomplished artist. Further, Halliday also had experience of painting the new Queen as well; he had painted the first full length portrait of her when she was still Princess Elizabeth. The painting was completed by 1956 and received universal praise. The first member of the Royal Family to admire the new painting was actually the Queen Mother who visited in June 1957. The Liverpool Echo described how she was suitably impressed by the painting: “she paused at the top [of the stairs] to admire Edward Halliday’s portrait and striking likeness of the Queen”.

However, before the new painting was commissioned Her Majesty visited the Town Hall in 1954. She was reported to have quipped on that visit: “Where is my portrait?” and then answering her own question: “It’s down there I think” pointing towards the cellar!

So, when the Queen looked back and smiled towards her portrait all those years later in 2016, was she smiling because she liked the painting so much with memories of her first full length portrait when she was a princess? Was she smiling because she was in one of her favourite Town Halls in the country? Or was she smiling thinking back to that visit early in her reign to Liverpool when the expected portrait on the staircase was not there? We will probably never know. It is certainly a beautiful painting (and a beautiful building) so that may just be that, but maybe there was a little memory of the missing portrait and Her Majesty’s first visit to Liverpool Town Hall as Queen.

As for the original painting by John Napper, it was not actually in the cellar of the Town Hall, but in fact was displayed back in the Walker Art Gallery at the top of the stairs. Napper would often say of his portrait that it was “not a portrait of the Queen but of a queen”, illustrative of the artist’s nature; he was described in an obituary in The Guardian in 2001 as “a large gentle-mannered man, an expert on everything with a sparkle of self-parody in his eye”.

After many years, it was put away into storage where it remained until 2013 when it found a new home in St George’s Hall. The then-deputy Lord Mayor Councillor Gary Millar explained the reason for putting it back on show: “We are very proud that Liverpool now has the original first painting hanging in St George’s Hall, which has been rehung to celebrate the anniversary of the Queen’s Coronation”. In choosing the position that the portrait would take, Councillor Millar added: “It will be the first thing people will see if they come to get married or have a civil partnership or attend a citizenship ceremony”.

As the BBC reported, John Napper’s widow commented to the Daily Telegraph on the new interest in her husband’s portrait: “I remember the painting well. He was disappointed with the angle at which he painted it, he only had one sitting. It was due to be hung up high so that you would look at it from below. If you looked at it from that angle it looked normal… when they showed it they didn’t put it up high and then it didn’t look like the Queen.” Of the painting itself she said “It is a beautiful painting, obviously he would have been pleased that it is going on display. I am pleased too, it is a beautiful portrait.”

So, the next time you visit St George’s Hall, be sure to pause and take a moment, like so many others before, to admire Napper’s beautiful portrait.