Liverpool will officially be flying the flag for Armed Forces Day from Monday 24 June. 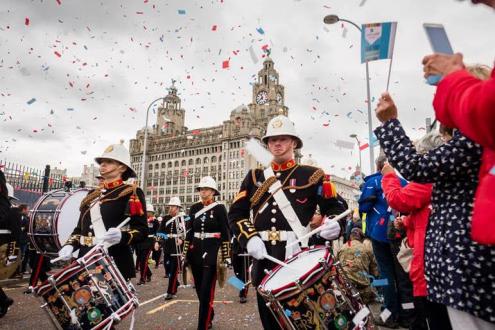 Monday marks the start of Armed Forces Week and, as is now traditional, the Armed Forces Day flag will be flown from the Town Hall. This year, Lord Mayor of Liverpool Cllr Peter Brennan will be joined by Lieutenant Colonel Matt Churchward, Commanding Officer Royal Marines Reserve Merseyside, to hoist the flag.

From Monday, civic buildings will also be lit up red, white and blue.

On Wednesday, the Town Hall will host HMS Eaglet’s annual awards ceremony with a Ceremonial Divisions at Exchange Flags at 7.30pm which the public is welcome to watch.

Also, for the first time, more than 50 businesses are supporting the city to say an extra special “thank you” to regular and reserve forces and veterans with a whole host of special offers in stores, restaurants and attractions – including many in Liverpool ONE. For a full list of offers please visit www.armedforcesdayliverpool.com

The timetable for Armed Forces Day, Saturday 29 June, is:

Lord Mayor of Liverpool Cllr Peter Brennan said: “Every year, Armed Forces Week lets us celebrate the commitment of the men and women who are serving and who have served their country.

“In Liverpool, we have always had strong connections with the military and have acknowledged this over many years by honouring local regiments and associations as well as the Merchant Navy with the Freedom of the City.

“I’m very much looking forward to welcoming Lieutenant Colonel Churchward on to the roof of the Town Hall to hoist the Armed Forces Day flag and officially launch Liverpool’s celebrations.”

Lieutenant Colonel Matt Churchward Royal Marines said: “It is a real honour to be raising the flag to officially launch Armed Forces Week.

“I know I speak for everyone in the Armed Forces community when I say it is humbling how the public has taken Armed Forces Day to its heart and especially in Liverpool where Armed Forces Week is now such a feature of the calendar.

“We’ll be looking forward to seeing everyone at the Royal Albert Dock on Saturday.”